Goodness, I went through two seasons without posting one thing! Don’t for a minute think that I haven’t been in the garden– we just had a few other things going on this year that kept me from normal blog writing.

In April, my family purchased some land with a small cabin on it– that was one of scariest things, honestly, I have could ever think of doing. The thought of all the work that had to be done was daunting, and downright terrifying. But, it ended up being one of the best things we could have invested in, and we spent those two seasons learning the land and led me to learning about the different specimens of trees that call our little plot of the world “home”.

Early morning picture in August. We have accomplished a lot, but have much more to do!

It’s been really interesting to learn the different types of trees we have, including Larch, which, I always admired from other places, because of the way it’s needles change color in the fall. Here was a little baby tree that was right next to our driveway.

The Larch tree can be seen in both summer and late fall.

Now, my big project is to figure out what trees are good for windbreak, but not big enough to block our sunlight, as we are powered by solar energy. So much to learn– getting there little by little! Stay tuned for some more adventures in the woods!

Now, back to regular gardening– yes, I did a lot of moving around in the garden again this year, to enhance growing performance for some plants–and it worked!

I am trying to work towards a “cottage” feel in the ‘burbs. I created rock borders for my garage and front yard.

My dahlia haul was fruitful this year. I tried a variety pack on a whim, and they turned out better than I expected! I highly recommend to everyone who doesn’t grow dahlias to try– having beautiful blooms all the way into October really makes the growing season feel longer–and how sweet it is to have fresh blooms to cut in the fall! 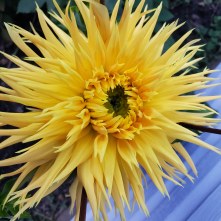 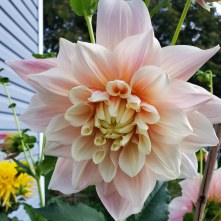 Well, I hope this sums up two seasons good enough. I am putting together a holiday gift list that will include items every gardener/outdoors enthusiast will need!